How "2 Boomer Babes" Get Better With Age 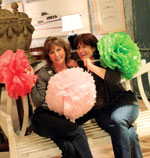 Below is a Q&A discussion between radio hosts “2 Boomer Babes” Kathy Bernard and Barbara Kline. Their show is heard around the globe and produced out of the AARP Headquarters in Washington, D.C. The show will celebrate its four year anniversary this March. In many listening areas, the “Babes” follow the show Car Talk.

Q: How did you get started with this?
The backstory: Barbara and Kathy had known each other for more than 20 years. They met when their kids were in preschool.  They have daughters who are the same age.

Barbara: As we looked for something to do with our children, there wasn’t a whole lot of information, so we started an informational TV show called “Our Kids.” We did that for a year and then Kathy had the nerve to move away. Fast forward 20 years and we both had different careers and we were now empty nesters.

Kathy: Barbara says it was another ‘hair brained’ idea, but after we dropped our youngest off at college I think I cried for 300 miles and then all of the sudden it was like ‘Wait a minute – so many people before us have gone through this. This is a new opportunity for us to embrace this empty nest. Maybe it’s our turn? Maybe we can start a new adventure?' So who do I call? Barbara.

Barbara: I was excited to have an empty nest.

Kathy: We come at things from very different angles but are the best of friends. We really did think this was a good idea.  Friends were talking about menopause, dating mid-life, health and life. There were so many things where nobody was hosting a broader conversation.

Kathy: We are not exactly trained broadcast people. We are just everyday people, really living the boomer moment. We are going through the same things with our nearest and dearest 76-million friends.

Q: Why was it important for you to start a radio show about baby boomer issues?

Barbara: The fact that everyone we knew was talking about all of these issues amongst themselves. Our parents getting ill, dementia, assisted living – really uniquely boomer issues. There are these very specific issues that we boomers are going through and thought it would be great to have a forum to talk about these things.

Kathy: Barbara is dealing with her wonderful father who has Alzheimer’s Disease. We can really talk about it and what it’s like to live through it – every day. There are just so many issues between the kids and the families and starting a career at mid-life.

Barbara: We really do what we know. Now there are the in-laws, relationships, having weddings – all sorts of things as we enter these different life stages and we talk about it.

Q: You’ve interviewed everyone from reality TV stars, authors, psychics, funeral directors and nudists. What was one of the most interesting interviews?

Barbara: Last year, we had the most unbelievable conversation with Chris Kyle, the sniper that was recently murdered by another veteran. He was a very successful sniper and saved a lot of lives. That one might have been our most poignant. You never know. We talk to so many fascinating people, they don’t have to be well known, but everybody has a story to tell and that’s what we like to sort of pride ourselves on.

Kathy:  We are doing this interview that is going to be a lot of fun this week on marketing to boomers. If you think about all the TV advertising everything from sex and drugs to reading glasses, it’s kind of funny but it’s a very huge group and economically important group. We have elderly relatives and kids. There are 80 million of us. We talk to people who have lost jobs and re-created themselves and their stories just get you up and going every day.

Q: Your theme song says “Like fine wine – we get better with age!” In what ways?

Kathy:  I’m 55 going on 35. I think it’s just our attitude. Every day I think being able to work with Barbara is just the greatest joy of my life. Every day wake up and do a job that I absolutely love doing. The neatest thing is it’s ours.

Barbara: I’m 56. We are like sisters. Each of us never had a sister. She is my sister. Nobody else that can make me laugh like Kathy. Just the experiences we go through are really funny. I think that’s what keeps me young.